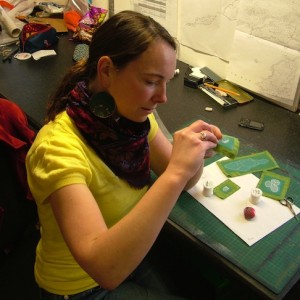 Fiona studied lacemaking at the Kenmare Lace Centre, where a strong tradition of lacemaking exists. It was introduced to the Town in 1861 by the Poor Clare nuns as a mean of creating employment and industryafter the Great Famine.

Dating back almost 200 years, Carrickmacross is the oldest of Irish laces.  Using sapplique and cut-away techniques, this style of lace is native to Co. Monaghan.

Recognised as a “pure lace”, Kenmare needlepoint is produced using only a needle and thread — thread as fine as a human hair.

The two techniques are intricate and highly complex, requiring hours of focused concentration.

Fiona’s studio overlooks the Atlantic Ocean on the Beara Peninsula between the village of Eyeries and Castletownbere.

In an interview at her studio with the West Cork Times, Fiona said that her work is inspired by the landscape of West Cork.  “As a child, I spent much of my time in West Cork, roaming through fields and exploring the wonders of the countryside.”